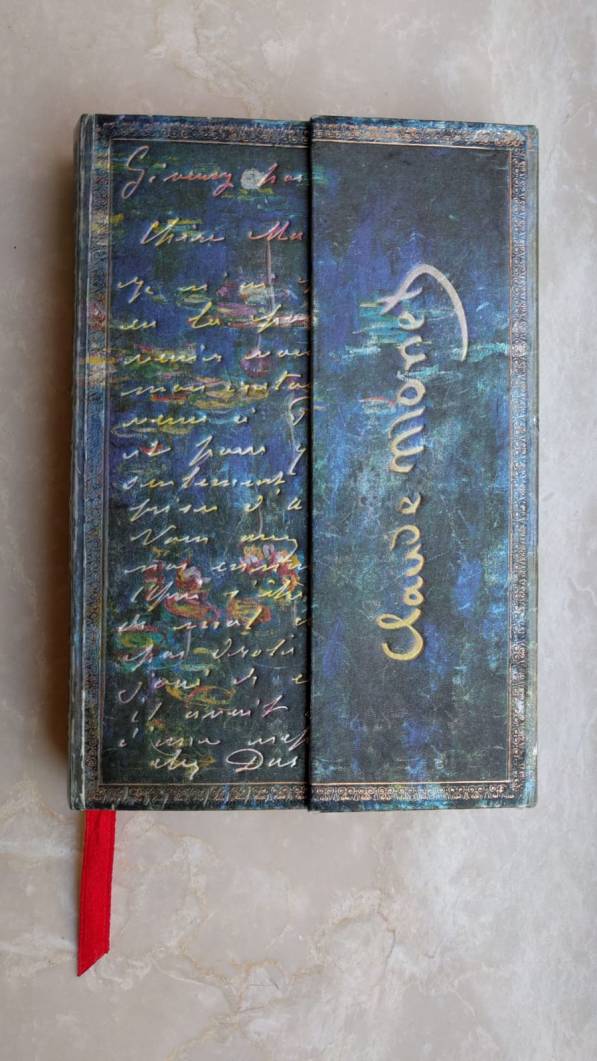 Another notebook that’s now part of the digital world! This one I bought after my trip to Switzerland, where I’d visited an art exhibition and seen Monet’s Water Lilies. As you can see, the cover of the notebook mixes one of Monet’s manuscripts with a background based on the Water Lilies, while the magnetic clasp displays Monet’s signature.

The small notebooks by paperblanks are my favourite because they’re beautiful, solid, and the most durable I’ve found so far. They’re not heavy, either. I prefer the ones from the Embellished Manuscripts collection, like this one. Not only because I love seeing manuscripts of artists I like, but also because the magnetic clasp is very useful, saving the pages from (very) possible encounters with spilled liquids and sharp objects found inside a bag.

Anyway, there were lots of ideas for different stories in this one, including a few ones set in the city where I was born: Madrid. I think I have mentioned them in my previous post.

The fantasy story I was rewriting also appears in several pages, and it looks like I changed the names of the main characters along the way. I didn’t even remember they had placeholder names before!

I also wrote down some weird dreams I’d had and more tips for amateur writers I found around the internet. Maybe I could share some links in the future if anyone is interested.

By the way, this is the last notebook I filled in 2015. I wonder what I’ll find in my next notebook…

Spanish person trying to fight a day job, an unfinished PhD and anxiety to get something written. View all posts by Sol Vera